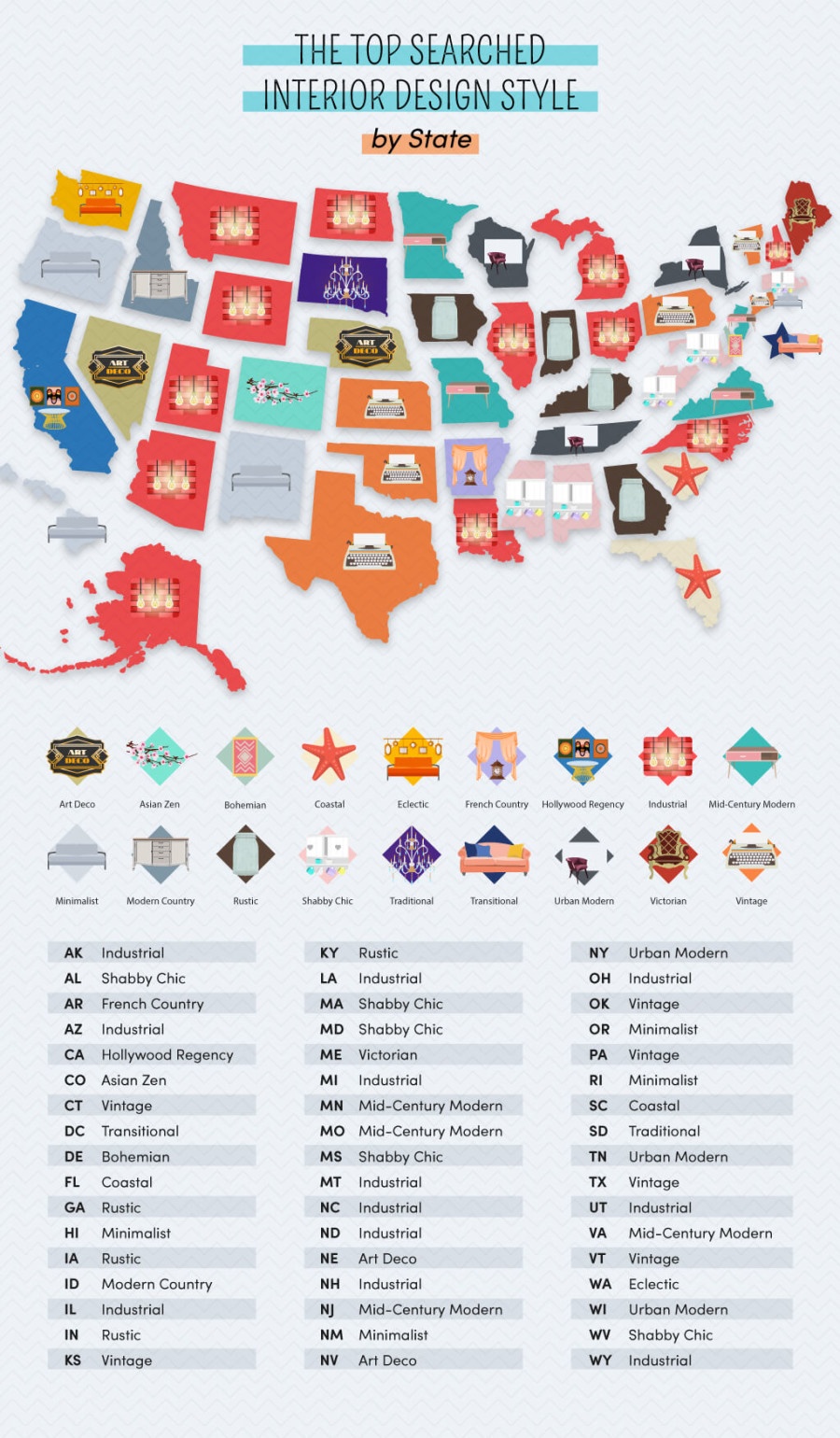 At Joybird, we are always interested to see how interior design takes shape in different areas around the country and world. Trends in this industry don’t exist inside a vacuum, so it’s a given that each state of the U.S. is different when it comes to style. Usually, these styles are influenced by the environment and the culture of the state. In places like Florida and South Carolina, you may see casual beachy themes and blue accents. In California, there may be more bold Hollywood styles that make a statement of fame and riches.

So how does each state characterize its own interior design? We decided to take a closer look into these styles by researching the top searched interior design style by state and region on Google Trends. These trends were broken down in 18 different categories, including styles such as Art Deco, Asian Zen, and Victorian.

From our research, we found that the most popular interior design style is Industrial. Out of the 50 states, 12 states had Industrial as their most-searched for interior design style on Google. Additionally, states that preferred the Industrial style weren’t just located in similar regions -- they come from all over. Among these were Alaska, Louisiana, New Hampshire, and Wyoming, which are each located in different regions of the United States.

The Industrial interior design style is sort of meant to feel like you’re in a factory with a modern touch. With open layouts, metal appliances and tools, and exposed brick, this style can be seen in plenty of urban areas. It allows people to appreciate a mixture of both antique and contemporary styles, and it can be expressed in different ways.

After Industrial, the most popular styles were Vintage (6), Shabby Chic (5), and Mid-Century (4). Some states are interested in more unique styles, such as Bohemian in Delaware, Asian Zen in Colorado, and Eclectic in Washington. Bohemian often features plenty of botanicals and bright colors, Asian Zen is characterized by minimalism and plenty of storage to reduce clutter, and Eclectic is a colorful mix of both old and new styles.

While we noticed that each style wasn’t limited to a specific region, Google Trends showed us that each region did actually have its own most-searched style. In the Midwest, Industrial took the lead as the most popular style. In the Northeast, the most popular style was Victorian, and in the South, Shabby Chic took over. The West was divided between both Industrial and Minimalist.

While every state had their top results, second and third place results varied as well!