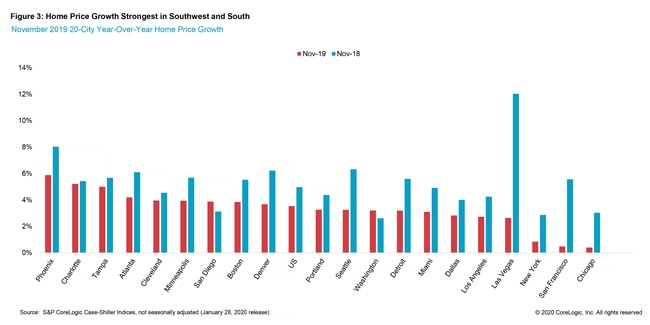 The latest S&P CoreLogic Case-Shiller National and Composite indexes confirm that the slowdown in home price growth that occurred in early 2019 ended in late summer with a gradual pickup in growth during the autumn. Annual growth in the national index quickened for the third straight month in November to 3.5% and was the fastest since April. In the United States, the Consumer Price Index for goods other than shelter was up 1.4% over the same period, less than one-half the gain in home prices.

The 20-city and 10-city composite indexes also had a pickup in their 12-month growth rate, though growth was slower than the national index in November at 2.6% and 2.0%, respectively. The increase in the 20-city index was the best since February, while the 10-city index posted the largest annual gain since May.

Last November, the mortgage rate was down about one percentage point for fixed-rate loans from one year earlier. This decline in mortgage rates has supported a rise in sales activity and home prices.  Nationally, employment gains helped to push the unemployment rate down 0.2 percentage points to 3.5% during that period, the lowest in 50 years. With for-sale inventory remaining very tight, market conditions were optimal to support additional home price growth.

Price trends varied across cities depending in part on affordability constraints and population growth pressures. The U.S. Census Bureau population estimates identified Arizona as the only state that was in the top three in population growth in numbers and percentage during 2019. Part of that population influx added to home-purchase activity in Phoenix, pushing up prices by 5.9% -- more than any other city in the composite index.

High-cost markets, where the lack of affordable housing remains a critical issue, had the largest deceleration in price growth from one year ago, with prices almost stagnant in the San Francisco and New York areas on an annual basis. New York and Illinois were the two states with the largest population loss in 2019, according to the Census’ estimates. This factor added to the sluggish prices in New York and in Chicago.

In nearly all cities, price growth was quicker for homes that were less expensive, highlighting the strong demand for affordably-priced homes and the limited supply available for sale in that price tier. As an example, homes with a sale price in the lowest one-third of the Phoenix market in November experienced an annual price increase of 9.0%, much more than for the Phoenix area as a whole. 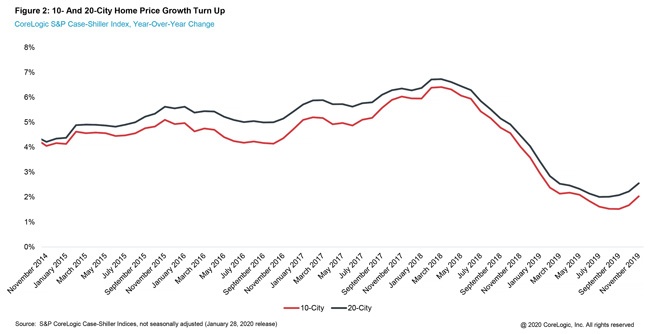