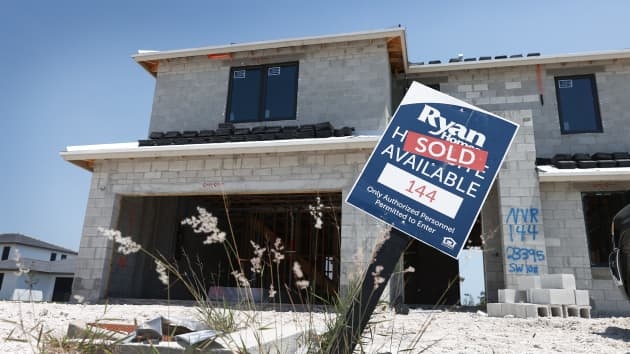 A strange and exciting anomaly surfaced in March housing data. The median price of a newly built home was slightly lower than the median price of an existing home sold that month. That hasn’t happened in more than 15 years. “Finally!” you might be thinking. “I can buy a brand-new, pristine home for less than an old one!”

“On a per-square-foot basis, within comparable markets, a new home is still priced higher than an existing home,” said Robert Dietz, chief economist at the National Association of Homebuilders.

National median prices mean that half the homes in the market sold for less, half for more. They are not repeat-sales indexes, like the much-watched S&P Case-Shiller home price index. A repeat-sales index measures the increase or decrease in the price of similar homes in similar places over time.
CNBC Real Estate Read CNBC’s latest coverage of the housing market:

February home prices see the biggest gain in 15 years, S&P Case-Shiller says
As home prices rise, here’s what buyers can do to land a deal
Red hot markets have turned surprising profits for unintentional property flippers
The trouble with the median now is that we are currently experiencing an unprecedented housing shortage, which is most acute on the low end of the market. There are so few lower-priced homes for sale that the market activity is skewed to the higher end.

For example, the number of existing homes priced between $100,000 and $250,000 that sold in March was down 10% from a year ago, according to the NAR, simply because there are so few for sale. Demand is high. Meanwhile, the number of homes priced between $750,000 and $1 million that sold was up 82% from a year ago. Sales of million-dollar-plus homes were up a stunning 108%. That skews the median much much higher.

There is also a tight supply of lower-priced new homes. The reason is twofold. After the housing crash just over a decade ago, there were so many relatively new, low-end foreclosures for sale that when builders did start producing again, they focused on the move-up market. It is also harder to build cheap homes now because commodity and land prices are skyrocketing. New home prices at face value are still rising sharply.

First-time buyers, however, are an increasing share of the new construction market, 43% in February, according to the NAHB. That is higher than the 31% share in the existing home market. That is partially due to historically low mortgage rates and builders finally starting to get back a little bit into producing entry-level homes. And it is pulling the median price for new homes lower.

How much you pay will also depend a great deal on where you live, according to Dietz’s analysis. New construction is most active in the South, where home prices overall are cheaper, so that helps the national median skew lower.