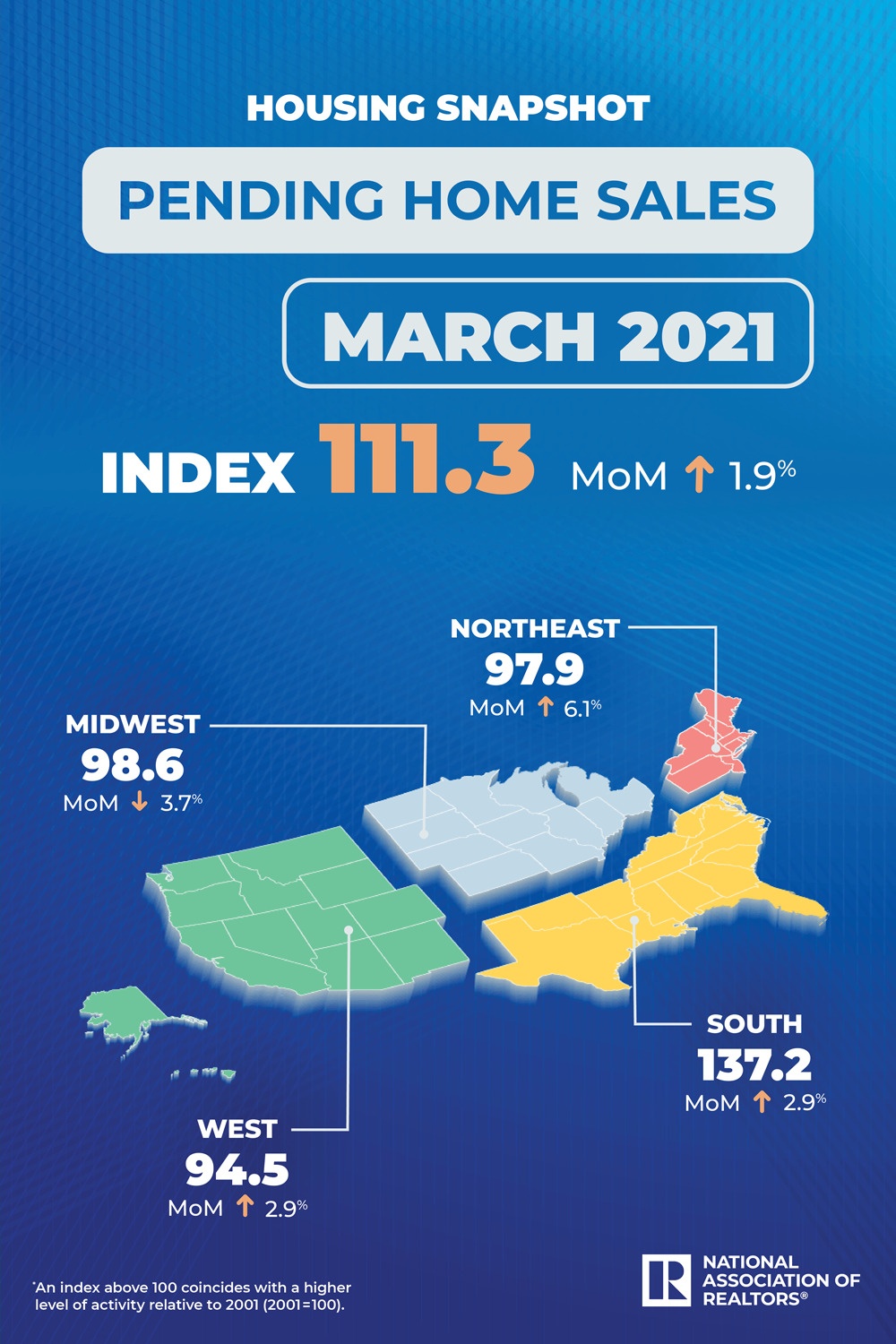 WASHINGTON (May 13, 2021) – After recording the quickest recovery in the nation's history in the wake of the COVID-19 pandemic, the U.S. economy is expected to kick into higher gear in 2021. That is according to analysis from the National Association of Realtors® delivered today during the 2021 REALTORS® Legislative Meetings & Trade Expo(link is external) at the Residential Economic Issues and Trends Forum.

With the number of vaccinated Americans increasing and new coronavirus cases on the decline, NAR Chief Economist Lawrence Yun anticipates the economy will grow 4.5% in 2021.

"Consumers will begin to spend massive savings, and do more shopping, restaurant dining, traveling and in-person house hunting," he said.

While home sales continue to be an economic bright spot, unemployment remains an issue. Eight million jobs that were lost during the pandemic have not yet been recaptured. Yun maintains that job recovery is taking longer due to some friction in the labor market, including workers being unable to return to their jobs, where work-from-home is not an option for many. As economic growth strengthens, 4 million jobs are projected to be gained this year.

Despite high unemployment, the economic recovery – propelled by favorable monetary and fiscal policies – has created the hottest housing market in nearly 50 years. The marketplace has surpassed pre-pandemic levels in terms of sales, but the fast-paced recovery has contributed to historic home price growth. In fact, a NAR report released Tuesday found that 89% of metros saw prices climb at double-digit rates on a year-over-year basis during the first quarter of 2021.

Thursday's presentation noted that the economic recovery, both in the U.S. and globally, has raised inflationary pressures which will ultimately lead to an increase in the 30-year fixed mortgage to an average of 3.2% in 2021. Consumer price inflation is accelerating due to higher costs for a number of goods and commodities, including oil, gasoline, lumber, moving and storage fees, household appliances, rents, and houses, which have reached record-highs.

"As mortgage rates increase, the frenzied multiple-offer situation will become less prevalent by year's end, as affordability challenges squeeze out some buyers and more inventory reaches the market," Yun said.

Although the low supply of housing has played a significant role in-home price surges, Yun expects more home construction, a growing willingness among homeowners to list properties due to an increase in vaccinations, and a gradual decline in mortgage forbearance.

In addition to homebuilders' intentions to ramp up construction, a recent NAR report – Case Studies on Repurposing Vacant Hotels/Motels into Multifamily Housing – details the idea of remodeling underutilized hotels and motels in order to help replenish the supply of affordable multifamily housing.

"With more inventory and some easing in demand, home prices are expected to shift to mid-single-digit appreciation by the fourth quarter and in 2022," Yun said.

Yun predicts that the median existing-home sales price will increase at a slower pace of 7% in 2021.

The National Association of Realtors® is America's largest trade association, representing more than 1.4 million members involved in all aspects of the residential and commercial real estate industries.