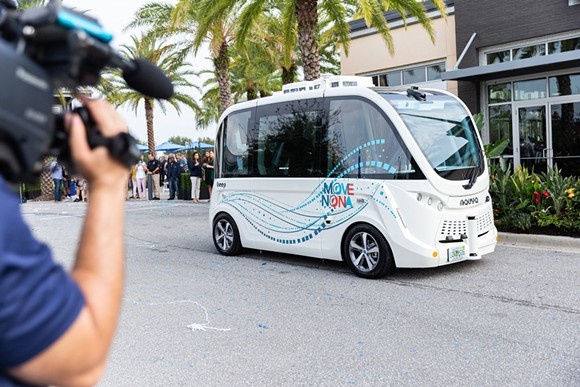 As the Lake Nona development continues to push Orlando's sprawling borders outward, builders and agents are looking at how to keep the place from becoming yet another car-choked mess. With that in mind, the developers behind the project have signed on with Japanese tech giant Hitachi to observe and analyze the way that people move through the growing community.

The deal was first reported by the Orlando Business Journal and will allow the company to use drones, surveillance cameras and autonomous vehicles to plot the movement of goods and people. The end goal is noble (it usually is): to create a better transit network and reduce points of friction throughout the community by watching how people use the already built environment. We can say this for Hitachi, they know a thing or two about friction and desire paths.

Juan Santos, a VP of the Lake Nona developer Tavistock, told the OBJ that they selected Hitachi for their experience building transit systems. Santos told the paper that they plan to act on Hitachi's findings every six months or so.

"It only counts if we build it,” he said.

While we are onboard with any project that makes it a little easier to move through metro Orlando, the normalization of surveillance tech in city suburbs is most definitely not a vibe.