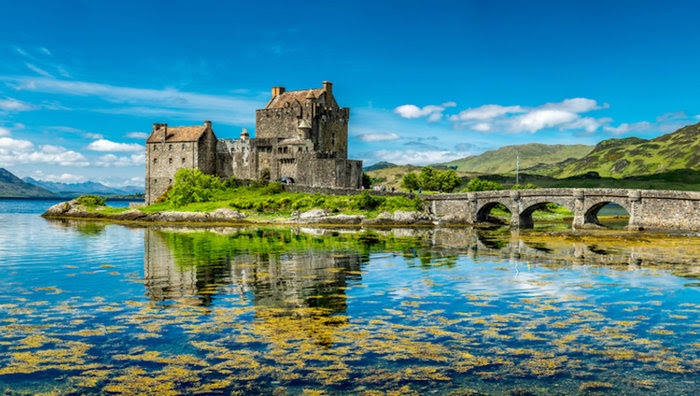 Abandoned places don’t always have to be creepy. In fact, some of the world’s most breathtaking sites have been left in the dust for decades. Over time, these places have stood empty and uncared for, but that isolation has contributed to their beauty and their intriguing history. From African ghost towns to Chinese lakes to surreal lighthouses, you’ll be awe-struck to discover these 10 breathtaking abandoned places.

Who knew a ghost town could be so eerily beautiful? The rocketing rise and fall of this tiny desert town took less than 50 years and was all due to the accidental discovery of diamonds in the region. The first shiny stone was plucked from the sand by a railway worker in 1908 which started a chain of events that lead to the area being quickly developed. For decades, people flocked to Kolmanskop in search of fortune. Eventually, though, even larger diamonds were discovered in another nearby town. And as quickly as Kolmanskop was created, it was abandoned for the promise of even greater riches. Today, the empty buildings are filled with windswept sand dunes, creating an oddly whimsical place in the middle of the Namib coastal desert.

Residents abandoned this hillside town in the southern Italian Province of Matera after one too many natural disasters endangered their lives. The medieval village was built on a perilously high hill for defensive reasons which, ironically, led to its demise. Craco’s lofty perch made it vulnerable during earthquakes and landslides. Slowly but surely, residents started leaving their precious homeland. However, it wasn’t until 1963 that the last of Craco’s residents were forced to completely abandon their village due to compromised personal safety. Today, the ancient village continues to stay present by finding fame as the filming location for several Hollywood movies such as The Passion of the Christ and Quantum of Solace.

The deserted fishing village reclaimed by nature is one of the most beautiful forgotten places in China. Remotely located on one of the hundreds of Shengsi Islands in Hangzhou Bay, this fishing village was totally vacated in 2002 by the fishermen-residents who grew tired of its hard-to-access location. Since its abandonment, Houtouwan has succumbed to Mother Nature who has refurbished the village with lush, creeping vines and plants. The village only recently reached fame in 2015 when some photos of the emerald Peter-Pan-like land went viral.

The futuristic 1980s vacation home of successful oil tycoon and businessman, Bob Lee, now lays cast aside off the southern tip Cape Romano (near Marco Island) in Florida. What looks like overwater igloos in the middle of the Gulf were actually originally built on the land. After erosion – and 1992’s Hurricane Andrew and 2005’s Hurricane Wilma — took its toll, the domes now sit 180 feet offshore with two of the original six domes fully submerged. The decrepit remains now serve as a canvas for graffiti artists and an artificial reef for marine life. Although somewhat depressing to watch such an extraordinary vacation home waste away, the Dome Homes have become a landmark in southern Florida.

This lighthouse surrounded by swirling sand dunes certainly deserves a spot on this list. The 23-meter lighthouse was built in 1900 on the high coastal slope on the North Sea, roughly 200 meters from the water’s edge. Over the decades, the sea crept closer and strong winds whipped sand from the nearby cliffs which slowly piled up around the lighthouse. Try as they might, locals were unable to suppress the dunes. They eventually got so high that the light could not be seen from the sea. Residents finally threw in the towel in 1968 and relinquished the lighthouse to the sand. What’s left is a strangely spectacular sight and proof of just how much influence Mother Nature has over the shape of our world.

Although contaminated with toxic waste, Homebush Bay still attracts tourists thanks to its four floating shipwrecks. These ships were all abandoned when they were sent to Homebush Bay to be stripped and reduced to scrap metal after being decommissioned. When the price of scrap metal declined, the stripping of the remaining vessels came to a halt and the remaining boats were left bobbing in the bay. The most impressive of the floating wrecks is SS Ayrfield, a WWII ship-turned-coal-transportation-vessel that now sprouts lush-greenery and dense mangroves from its deck.

Why would you up and leave a stunning Mediterranean beach resort favored by the likes of Richard Burton, Bridgett Bardot and Elizabeth Taylor? Described as the French Riviera of Cyprus, the notoriously gorgeous setting was once the symbol of luxury, but that all changed in 1974. The 40,000 residents fled their stunning seaside when the Turkish Army stormed the island. While Turkish troops still control the area today, there are talks between both Greek and Turkish Cypriots to rebuild Varosha to its old glory.

The story of the rise and fall of Detroit’s economy can be told by Michigan Central Station, a once-gorgeous tribute to the city’s most prosperous era that now sits decaying behind Roosevelt Park. Functioning as the transportation heart and soul of the city, the station flourished for decades until finally conceding to Amtrak in 1971 and ultimately closing in 1988. The building – designed by the same firms that created Grand Central Station in New York and constructed in popular Parisian 19th-century Beaux-Arts style — is now a hangout for vandals and the city’s homeless population. Although crumbling and dilapidated, there’s no denying the grandeur this historic train station once possessed.

Purposefully flooded in 1959 to make way for a new dam and hydroelectric station, the 600-year-old city now sits fully submerged in Qiandao Lake. Dating back to the Ming and Qing Dynasties which ruled between the 14th to 20th centuries, this underwater treasure trove is often referred to as the “Atlantis of the East.” Perfectly preserved in 40 meters of water, this ancient city is only discoverable by experienced scuba divers. For the rest of us, we can only gawk at the photos they capture and bring back.

Set in the stunningly scenic Highlands of Scotland, the tidal island of Eilean Donan inspires everyone from the hopelessly romantic to the stoic and cynical. Constructed at the meeting point of three sea lochs, Eilean Donan’s 13-century castle was built to protect against Viking invasions. The castle ultimately met its demise in the early 18th century in a battle between the Spanish and English. The castle has since been restored and a gracefully arched bridge was built in order to better access the historic grounds.